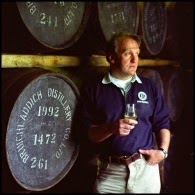 
What has been your biggest career highlight to date?
Resurrecting Bruichladdich; and now Waterford in Southern Ireland, albeit on a somewhat different scale, budget - and time. It's very, very exciting to have such a modern distillery with an exceptional opportunity to try different things with very fancy kit.

Can you remember your first dram, and indeed what it was?
Bruichladdich some-thing-or-other from the sixties with Jack Milroy in Soho Street. The first dram I am aware of was nosing a glass of my father's Laphroaig on Kintyre in the seventies when I was about twelve.

What does whisky mean to you?
A living. A chance to be a producer rather than a mere re-seller; to put in to practice ideas and concepts that challenge common held perceptions.

Where would you like to see yourself in five years time?
I don't know about five years time, but I have distilled on one remote west coast island; now on another, further west; ultimately I would like to be even further west still, for a twilight hat trick.

What was your last dram?
Bruichladdich Islay Barley. I love its purity, honesty and integrity. It genuinely thrills me.

Do you have a favourite whisky and food pairing combination?
No. I'm not a great believer in whisky and food combos; it smacks a bit of desperation to me. Wine is clearly so much better for that.

What’s your favourite time and place to enjoy a dram?
Outside, sharing with a mate. I spent a glorious afternoon on a beach with a neighbour and a youthful, vibrant bottling - Around the kitchen with a lighter, fresher dram as an aperitif - A bolder, heartier dram in a fishing hut, by a river or at a lunchtime picnic - Something deep and moody in my study late at night. Thinking about it, either on my own or with one other.

What do you think is going to be the next big thing on the whisky horizon?
Unfortunately, flavoured whisky.

What’s the one dram you couldn’t live without?
I could give you some facile marketing department answer - but I won't. There isn't one.