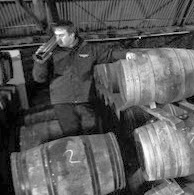 
How long have you been working in the whisky industry?
I’ve now been working in the industry for thirteen years. I started working at Bruichladdich in January 2001, as part of the small team that resurrected the distillery after it had been closed for six years. After five months of cleaning, painting and restoring equipment, we finally started distilling on the 29th May 2001.
What has been your biggest career highlight to date?
There have been many highlights working at Bruichladdich. Right from the off when we started distilling, to the birth of our Port Charlotte and Octomore single malts. But if I had to choose one, it would have to be when I was appointed Distillery Manager at the age of 28. I was very honoured to be selected for this role which carries a lot of responsibility, and to be one of if not the youngest distillery managers in Scotland was a fantastic honour.
Can you remember your first dram, and indeed what it was?
If I’m totally honest my first taste of whisky was before I was legally allowed to do so. I tasted some of my father’s Laphroaig from his drinks cupboard, and at the time I did not understand how to drink whisky. I just took a mouthful and burned my mouth. I then thought to myself I’m never drinking that again.
The first whisky that I actually enjoyed (and legally so) was a Bruichladdich 15 Year Old. When I first started working at the distillery we would often end each day with a dram as a reward for the hard, dirty work. It was the old 15 Year Old, in the dark green tube packaging that JBB bottled before we took over. It was a fantastic whisky!
What does whisky mean to you?
Whisky means a lot to me and my family, I’m the 3rd generation of my family to be making whisky on Islay. My father and grandfather both worked at Laphroaig and my uncles worked at Ardbeg, Lagavulin and Bowmore. My brother also works in the industry and is currently at Bowmore. Because of my family’s heritage I knew at an early age what career I wanted to pursue. I think on Islay whisky is everything to a lot of people including myself. It’s a way of life, it’s what we Ileach’s were put on earth to do!
Where would you like to see yourself in five years time?
Sitting in the Caribbean drinking Rum! Just kidding, hopefully in five years I will still be here doing what I am doing now. I love my job and I wouldn’t change it for anything. I think there is going be a lot of exciting things going on at Bruichladdich in the future, so why wouldn’t I want to be here!
What was your last dram?
It was a 2006 Bruichladdich Bere Barley. A nice clean, fresh whisky with fruity, floral notes. I like this whisky a lot and look forward to watching it develop.
Do you have a favourite whisky and food pairing combination?
To be honest I don’t usually pair whisky with any food, I prefer a dram after a meal. I would normally pair wine with food.
What’s your favourite time and place to enjoy a dram?
At home with family and whilst socialising with friends.
What do you think is going to be the next big thing on the whisky horizon?
I see a lot more small craft distilleries popping up, which is great thing, as many of them like us appreciate provenance and the craft of making whisky. It’s amazing to see so many malt distilleries coming back into operation.

When I was born in 1980, there were 114 malt distilleries in operation in Scotland, but by 1986 that fell to just 81. Thankfully that figure has increased again to 101 distilleries in operation in 2013, so it’s great to see things on the rise again. It means more jobs and more whiskies will be available, it’s great for Scotland!
What’s the one dram you couldn’t live without?
I have many special whiskies in my drinks cupboard, but I suppose the most special and one I don’t share is a sample of Black Bowmore 1964 30 Year Old.
As for an everyday whisky that I couldn’t live without, it’s a hard one as there are so many great expressions. But if I had to pick one for a lifetime supply, it would be Bruichladdich 16 Year Old.
Email ThisBlogThis!Share to TwitterShare to FacebookShare to Pinterest
Newer Post Older Post Home