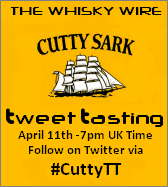 On Wednesday we held the latest in our string of hugely successful Tweet Tastings, exploring a bountiful bounty of blends from Cutty Sark.
In addition to our great gaggle of Tweet Tasters we were also joined by Cutty Sark’s Master Blender Kirsteen Campbell, who not only tweeted in on the action but was also on hand to answer any Cutty based questions on the night, as we made our way through their Standard Blend, 12yr, 18yr and Tam O’Shanter expressions.
Here are a few tweeted tasted highlights from the night:

Cutty Sark Blend
@TWLJoe A light delicate little creature with some citrus and biscuity flavours. Definitely picking up the grain presence in a big way.
@Rodbodtoo The palate is a bit fuller and oily than I expected from the nose. Plenty of malt flavours, like malted milk biscuits.
@TheWhiskyWire Floral fresh, lingering and light with wisps of vanilla & honeycomb.


@TWLJoe You get a real sweet vanilla note straight away. Then the rich fruity sherry appearing with spice in spades.
@TIA568B On the palate it’s a lot lighter than I expected, nectarines, honey, creamy vanilla fudge, fruity, slightly salty, chocolate hobnobs.
@cuttysarkblend The trick with creating that subtlety is striking a balance of flavour without any one being too dominant.


@YorkWhisky The nose on the 25yo is awesome. I expected fruit cake but there’s also tobacco, jasmine tea & apple blossom.
@boardsy Lots of candied orange peel, a touch of cinnamon and some spiced rum again. This really needs to be paired with some 80% cocoa choc.
@TWLJoe Biscuity, raisins, caramel, dark chocolate orange, toffee crisps and spicy chutney. Awsome!
As ever these are just a hinted highlight of the tasting tweets from the night. For a full low down head over to Twitter and feast your eyes via hashtag #CuttyTT.
All the expressions we sampled are available from The Whisky Exchange; Cutty Sark Blend £17.75, Cutty Sark 12yr £30.49, Cutty Sark 18yr £56.95, Cutty Sark Tam O’Shanter £199.00. *All prices correct at time of publishing.
A huge thanks to everyone who took part or followed this weeks event. There are plenty more Tweet Tastings to come, so if you would like to be one of our Tasters, register your interest and contact details now by emailing via the contact tab marking the subject line ‘Tweet Tastings’.
Until next time Happy Dramlaxing!
Email ThisBlogThis!Share to TwitterShare to FacebookShare to Pinterest
Newer Post Older Post Home