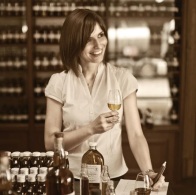 How long have you been working in the whisky industry?

I’m in the 12th year of my career, and all within the whisky industry.  After graduating with a degree in Nutrition and Food Science, my first two jobs were laboratory based at Diageo and then The Scotch Whisky Research Institute. There I was able to gain an understanding of the process (both grain and malt) how flavours are created. I got my first taste (terrible pun) of sensory work in 2007 when I joined the Edrington Group where nosing whisky became a full time role.
What has been your biggest career highlight to date?
When Edrington took full ownership of the Cutty Sark in 2010, and I was asked to be Master Blender for the brand.
Can you remember your first dram, and indeed what it was?
Unofficially, my first ‘taste’ would’ve been from dipping my finger into my dad’s dram glass many years ago, but officially I think it was either a Ginger Grouse at a food fair, or a Glengoyne on a distillery tour as a student.
What does whisky mean to you?
People’s enthusiasm for whisky never fails to impress me. I love the way you can go anywhere in the world and there’s someone who is genuinely interested to talk about it.  It makes me feel very proud to be a part of the story and I appreciate how lucky I am to work in this role.
Where would you like to see yourself in five years time?
Scary thought, I will be nearly forty! I would love to see Cutty grow, and break through to new whisky drinkers, particularly those who thought they didn’t like whisky.  I like to prove people wrong in that way.
What was your last dram?
It was a 10 year old Arran on a recent trip over there. I like to sample the local tipple when on holiday.
Do you have a favourite whisky and food pairing combination?
If I was being honest I’m more into wine with food, but enjoy an after dinner dram.  Depending on whether I’m in a sweet or savoury mood, I’m partial to a wee piece of cheese or tablet (Scottish fudge) alongside.  Highland Park 12 year old has been tried and tested with both and works equally well.

What’s your favourite time and place to enjoy a dram?
Cliché, but as long as it’s in good company I really don’t mind. From trendy London bars to home in the Scottish Highlands.

What do you think is going to be the next big thing on the whisky horizon?
Lighter styles, easy drinking whiskies, perhaps involving more experimentation with grain.  Mixology is huge at the moment and I see that trend continuing, with non-whisky drinkers beginning to take notice of the versatility of Scotch.

What’s the one dram you couldn’t live without?
The entire Edrington stable, it pays my mortgage. In all seriousness, it’s great to work with such quality whiskies, we have a strong portfolio and I’m enjoying the opportunity to work on Cutty Sark in particular, both as custodian of the existing range and working on new expression.  Watch this space!

Many thanks to Kirsteen Campbell. Who will be the next Whisky Insider? Click back soon to find out!