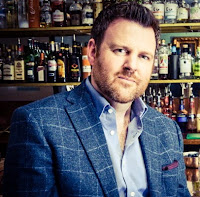 How long have you been working in the whisky industry?
I’ve enjoyed 18 great years (and counting) in the Scotch whisky industry, across a number of commercial and marketing roles. Eleven of these were spent at Edrington, where as Area Director I helped set up the company’s Africa and Middle East headquarters in Johannesburg, South Africa.

What has been your biggest career highlight to date?
Being enrolled as a Keeper of the Quaich and being awarded Edrington’s Chairman’s Award in the same year – 2013, was a definite career highlight, which helped me start to appreciate the positive impact I was beginning to have within our great industry.
Can you remember your first dram, and indeed what it was?
I actually can’t remember my first whisky but my dad always had a lot of bottles in the drinks cabinet at home, so it was probably something from his selection.
What does whisky mean to you?
Scotch whisky is both a hobby and a career for me. Even if I wasn’t fortunate enough to work in the industry, I’d still spend a lot of my time thinking and talking about it. For me what’s in the glass is a culmination of everything that has gone before. The raw materials, the equipment, the place, the hands that have crafted it, the wood that has helped mature it, the people who count on the industry for employment – everything. I’m incredibly proud of our industry, the history of it and the high esteem in which Scotch is held the world over.
Where would you like to see yourself in five years’ time?
I have big ambitions for my company and I want it to become one of the most exciting independent bottlers in the next five years. My daughter will be close to finishing her education in five years so, who knows, it might be something she gets on board with. We’d make a great team, I’m sure.
What was your last dram?
I sipped a 2008 Linkwood single cask sample last night. It has been finished in a Chateau Lafite wine barrique and I’m in the process of buying it for bottling. It’s highly distinctive in colour, aroma and flavour and I was just double-checking that I still liked it as much as I did the first time I tasted it.
Do you have a favourite whisky and food pairing combination?
Whisky can be a tough match for food. I normally drink whisky before or after a meal. However, a sweet sherry aged Speysider can be a great accompaniment for a cheese board and I often go down that route.
What’s your favourite time and place to enjoy a dram?
So many great times and place for a dram but I’d have to say, at home, late Autumn, with the wood burner stoked, after a good meal is my happy place.
What do you think is going to be the next big thing on the whisky horizon?
I have high hopes for single grain and will deliberately champion this category because I think it is completely misunderstood and generally under-rated, especially at the older end of the spectrum. I defy any whisky drinker to try a well-aged grain, matured in a first fill bourbon barrel and not enjoy it. It’s a bit like bourbon-on-steriods and I think there’s a big opportunity to educate and engage here. I’ve included a 1984 Cameronbridge and a 1996 Invergordon in my first release. Both are absolutely stunning.
What’s the one dram you couldn’t live without?
I embrace the variety on offer within the industry and part of the enjoyment is finding something that you really like but maybe didn’t expect to. Equally, I have found myself underwhelmed by whiskies that I thought I would like. My go-to drams over the years have included The Macallan Fine Oak 15 Year Old, Highland Park 18 Year Old, Glenmorangie Lasanta and The Balvenie Caribbean Cask. If I was pushed to pick just one it’d be The Macallan 15 Year Old Fine Oak, but it has been discontinued so I guess I’m going to have to learn to live without it.
Many thanks to Keith Bonnington. Who will be our next Whisky Insider? Click back soon to find out!