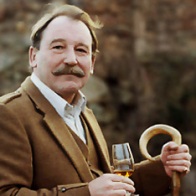 How long have you been working in the whisky industry?

I wrote my first job for Bell’s in 1981. I don’t work ‘in’ the industry, I’m an observer, historian and consultant to the industry, especially on training, flavour profiling and of course history.

Nor do I work ‘for’ the industry. I am independent of any individual company, though over the 31 years that I have been researching and writing about Scotch whisky, I have pretty much worked with every company in one way or another.

My independence and discretion (I was a lawyer once) is important to my clients, and it is only through very close contact with these clients that I have managed to survive as a whisky writer and managed to amass all the information I need for my books.

What has been your biggest career highlight to date?
Difficult question to answer, as there’s no specific highlight. But there have been a number of key moments.

In the 1980s, being asked to research and write a substantial booklet and brochures for Highland Distilleries, Glenmorangie, Allied Distillers and the nascent United Distillers (now Diageo). This gave me the cred to propose a book about Scotch whisky to an international publisher in 1988. The book was published in 1992 and more or less bankrupted me! But after that, my tattered career took a swerve towards Scotch whisky. Other book commissions then followed.

Very significant in retrospect, was being invited to do a course on ‘The Sensory Evaluation of Potable Spirits’ by what is now the Scotch Whisky Research Institute in 1992. This changed my life and opened up the world of smells. I am deeply grateful to Dr Jim Swan and Mrs Sheila Burtles, the principal tutors.

Richard Gordon, MD of the Scotch Malt Whisky Society was also on this course. He invited me to become chairman of the Society’s Nosing Panel, and to write the tasting notes, which I still do, and has exposed me to many thousands of cask samples over the past 20 years.

Around this time, I was invited by Dr Nicholas Morgan (United Distillers) to design and present a whisky dinner in London for VIPs. This initial engagement developed into a long-standing dialogue and emerged in the late 1990s as an in-house, five day training programme about malt whisky.

In about 1998 I was approached by Damian Riley-Smith and Marcin Miller to advise about and later edit the Whisky Magazine. My editorial role lasted for only a few issues, but the magazine still thrives, and my involvement with it did no harm to my reputation within the industry.

More recently, when I was asked by Ken Loach’s scriptwriter to advise about a film he was planning, that I later went on to play a part in as a whisky expert. Maybe when I walk up the red carpet at Cannes on 22nd May, the day devoted to ‘The Angels Share’ this will be my ‘biggest career highlight to date’!

Can you remember your first dram, and indeed what it was?
I’d rather not talk about it, but the first dram I remember with pleasure was a Glenlivet in 1968. I was at school with the son of the owner of distillery and we used to go there for holidays.

Where would you like to see yourself in five years time?
Exactly where I am now!

What was your last dram?
It was the best part of a bottle of Adelphi Private Stock, a blended Scotch.

Do you have a favourite whisky and food pairing combination?
Not really, except for Lagavulin 16 year old and Roquefort cheese, and maybe also a Talisker with fresh oysters.

What’s your favourite time and place to enjoy a dram?
At my desk between 6.00 - 7.30pm while I am wrapping up for the day. Even better with friends and before or after a meal.

What’s the one dram you couldn’t live without?
A blended Scotch Whisky of decent quality. Seriously, my work is malt which I still regard as the senior branch of Scotch, but it’s work for me. Give me a good blend to relax!


As mentioned above, Charles makes an appearance in the new Ken Loach film 'The Angels Share' which hits UK cinemas from the 1st of June. Check out the trailer below and keep an eye out for Charlie.