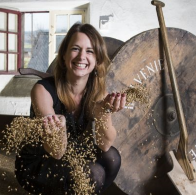 What has been your biggest career highlight to date?
I’ve been lucky enough to have some incredible experiences since entering the world of whisky so there have been many highlights! The first time I hosted the opening tasting at the Victoria Whisky Festival for almost 100 women is definitely one of them. I was on ‘home’ ground (having grown up in British Columbia, Canada) and the energy in the room was unbelievable. Most recently, having the opportunity to work with Michel Roux Jr on series two of The Balvenie Craftsmen’s Dinner has been fantastic. I’m a huge lover of food (travel and food are my next true life pleasures alongside whisky) and having the chance to work with someone so well known, and so incredibly skilled and respected at his craft, has been a joy.

Can you remember your first dram, and indeed what it was?
Technically, the first whisky-based drink that caught my eye was Baileys – my mum used to put it in her coffee as a special treat at Christmas and I recall trying to have sneaky tastes of it! I progressed onto whisky and cola when I was 18, and after a bit of a rough next morning, vowed I’d never drink the stuff again! Luckily, a chance whisky tasting at Milroy’s in Soho in 2008 saved things, and while I don’t remember the exact whisky that changed my viewpoint, I do remember loving whisky in general from that night onwards.

What does whisky mean to you?
Whisky means friendship, it means joy, opportunity, travel and beautiful memories. I met my partner while on a whisky trip in Scotland, and have made friends around the world because of it so it’s much more than just a drink to me.

Where would you like to see yourself in five years’ time?
I’ve had quite a strange career path – from being a tried and tested journalist from the age of 16, to running my own business, to taking on a full-time position within the whisky industry. The last five years have been filled to the rafters with incredible experiences and opportunities, so I’m hopeful that I’ll be blessed enough in five years’ time to be able to look back with as much joy as I do sitting here now, reflecting on the last five.

What was your last dram?
A Balvenie Founder’s Reserve. I have been entertaining a group up at our distillery and brought along one of our old bottles that we don’t make any more to let everyone try something different. It was delicious and so drinkable – it doesn’t surprise me that it’s a classic!

Do you have a favourite whisky and food pairing combination?
I love whisky and chocolate, and it’s been something I’ve explored a fair amount over the past few years. I’m currently working with an amazing bean to bar chocolate producer called Pump Street Bakery – one of the only producers to carry out the full process here in the UK – and I love exploring the flavours and terroir of different chocolates, and how they go together. I also won’t say no to whisky and ice cream! Whether that’s whisky infused ice cream, or just whisky poured on top, it’s delicious any time of year.

What’s your favourite time and place to enjoy a dram?
I have a lot of love for those rare moments when I can switch off, be at home with my other half, read a book or watch a great film and just pour a dram. It’ll often not be in a nosing glass, but maybe in a tumbler and maybe even with a large hunk of ice in it if it’s a big bold bourbon that needs a bit of taming. I don’t get a huge amount of time at home, and I love those moments of just properly relaxing, not worrying about tasting notes or anything. Just enjoying the space that I’m in at that time.

What do you think is going to be the next big thing on the whisky horizon?
I’m as much of a fan of something new as the next person, but I think whisky still has a long way to go before it can get a wide appeal amongst a big demographic. Things are changing slowly but there is still a lot of misconception out there about whisky in general. So, my hope isn’t around the next big thing, but rather a growing education and love for whisky globally. The education side is something I enjoy most about my job and there are a lot of amazing ambassadors out there doing the same thing, so hopefully long may that continue!

What’s the one dram you couldn’t live without?
An impossible question Mr Rush! I could never narrow down my love of whisky to one single dram – but that won’t be a surprise to many people. I’m the person ordering two starters instead of a main course at a restaurant because I like to keep trying more things, so this ethos fits with other parts of my life outside whisky.

Many thanks to Alwynne Gwilt. Who will be our next Whisky Insider? Click back soon to find out!