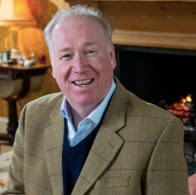 How long have you been working in the whisky industry?
In some ways for over 20 years, as it was that long ago that I first met Michael Jackson, when he visited Lindores and wrote ‘For the whisky-lover it is a pilgrimage.’ This was the first time I had been made aware of the famous 1494 entry in the exchequer rolls.

Arguably, I was also in the industry when my wife Helen was running Glenmorangie House up by Tain, where I was the chef. So many of the people in the industry that I have met along the way, have tasted my haggis, neeps and tatties!
So, the Lindores ‘project’ has run for over twenty years, but it certainly accelerated five years ago when I secured the funding to build the distillery.
What has been your biggest career highlight to date?
The day we opened the distillery and when the first spirit flowed at Lindores Abbey for over 500 years. We were delighted to welcome Richard Patterson and Ian Rankin to the distillery to share that special day.
Richard has been a long-time supporter of the project and many years ago he very kindly gave me a bottle of his ‘1994’ blend. This won the competition, when major whisky companies produced a commemorative blend to celebrate 500 years since the famous 1494 exchequer roll being published.

I hadn’t opened the bottle, so was absolutely delighted when Richard brought another one which we then opened and toasted the distillery with.

Can you remember your first dram, and indeed what it was?
I remember it was a Macallan of some sorts, I was about fourteen and fishing with my Father. As was the norm at the end of the day he was sharing a dram with the ghillie and I must have nagged for a go and eventually was given a shot. Seeing my face I was advised that I could add water, I added a lot and completely drowned it, not a great start!

What does whisky mean to you?
Right now it means my life, my work, my future and my family’s future. We have lived at Lindores Abbey for over a hundred years. The Abbey itself has existed for over nine hundred years, so if by creating the distillery and the preservation society we can preserve what remains for another few hundred years I will feel I’ve done my bit!

Where would you like to see yourself in five years' time?
Hopefully tasting a superb, multi-award winning Lindores single malt, sitting on the shelf next to an array of ‘lindores ‘Aqua Vitaes, possibly apple, pear and plum. The Lindores orchards, will have matured and the produce and the honey from our bees will all be used in our drinks, happy days!

What was your last dram?
We live at the distillery which is a good and a bad thing, the bad thing is that it is really a 24 hour job, however the good thing (amongst many others) is that we have the Legacy bar which is very well stocked. We have a number of SMWS bottlings to explore, but my last dram was an Old Pulteney 12 Year Old. We lived up by Wick for a while and I’m a fan of their slightly salty nectar.

Do you have a favourite whisky and food pairing combination?
We recently had Sandi Toksvig visit us, she’s a lovely lady and extremely knowledgeable about her drinks, she is a Dane and she suggested paring our Aqua Vitae with some smoked meats, it was sensational with smoked duck for instance.

What’s your favourite time and place to enjoy a dram?
At the end of a long day there’s not much to beat putting your feet up with a decent dram.

We had a time lapse camera filming through the build and it’s now a ‘live cam’. Most of the time we completely forget it was there, and when the legacy bar was almost complete Helen and I went in for a well-earned dram after a hard day during the build. Just as we sat down her mobile went off, it was the mother in law, she could see us on the camera and I think assumed that’s what we did all day!

What do you think is going to be the next big thing on the whisky horizon?
There are so many finishes and special bottlings nowadays that it’s hard to surprise people. For me the really clever thing to do (as it is in cheffing) is to achieve a consistently very high standard of spirit.

Our monks had permission to take 200 cart loads of peat from the nearby peat moors of Kinloch, so possibly a peated expression form a lowland distillery might turn a few heads.

What’s the one dram you couldn’t live without?
I would have to go back to my gift from Richard Patterson. I know how much Lindores means to him and that bottle has been on the shelf in my office throughout the ups and downs of this project. Now that I’ve tasted it, I know the quality of what’s inside that bottle.

Many thanks to Drew McKenzie Smith. Who will be our next Whisky Insider? Click back soon to find out!