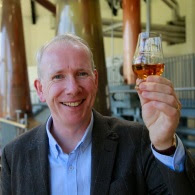 What has been your biggest career highlight to date?
Seeing the first ever new make spirit run into the spirit safe or our distillery at Royal Oak, on Easter Sunday of 2016, with my wife Rosemary. A dream realised and the end of the beginning!

Can you remember your first dram, and indeed what it was?
I would like to say Redbreast as that was my Grandfathers tipple when I was a young lad, and I may have sipped the end of his glass once in a while. But in earnest I suppose I was well into my twenties when I started to discover whisky. I was on a work trip to Angelsea Aluminium in North Wales in the 1980’s, to install a ‘Plant Maintenance’ system I wrote (software geek). I was treated to a fine dinner in a local hostelry and after dinner the cart arrived with an array of whiskies. My Welsh friends took me on a taste of Scotland…the first of which was a Glenfiddich … and thus it started!

What does whisky mean to you?
Many things. A wonderful drink for special moments of celebration and reflection in equal measure. A never-ending quest to produce the best dram possible from a range of styles and parameters. An opportunity to play a small part both in securing the renaissance of Irish whiskey and contributing to the pantheon of world whisk(e)y.
Where would you like to see yourself in five years time?
In the maturation house at Royal Oak building our whiskey legacy.
What was your last dram?
Last night we had a jazz quartet play in the distillery at Royal Oak for a lucky few on Saint Valentine’s. We sipped the last drops of the single cask of The Irishman 12 Marsala. Truly a special dram – even if I say so myself!
Do you have a favourite whisky and food pairing combination?
Other than Porridge and a cap of whiskey on a Sunday morning, I really enjoy Writers’ Tears Red Head with a poached pear dessert drizzled with homemade toffee! The fruits of Writers’ Tears Red Head are already accentuated by the fully matured single malt in sherry butt, now let the sweet pear bring that to a new level with natural green fruit sweetness to contrast with the raisin emanating from the sherry butt.
What’s your favourite time and place to enjoy a dram?
Sitting, at the end of a good day, in my leather armchair in our cosy distillery bar at Walsh Whiskey with Ella Fitzgerald singing to me the background. Soothing satisfaction!

What do you think is going to be the next big thing on the whisky horizon?
The jewel in the Irish crown will be single pot still whiskey. It can do what single malt did for Scotch in the past 40 years. There is still a bit of work to do on single pot still here in Ireland, but watch this one! At Walsh Whiskey Distillery we are not only busy laying down much need new stocks of single pot still but we are also innovating…. We just distilled the first ever organic Irish single pot still ….more to come!

What’s the one dram you couldn’t live without?
Writers’ Tears Copper Pot!

Many thanks to Bernard Walsh. Who will be our next Whisky Insider? Click back soon to find out!