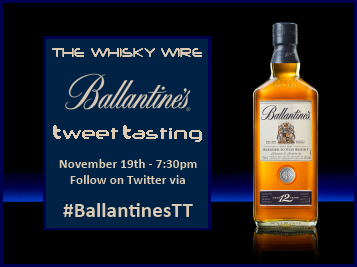 Not only are we thrilled to launch our 55th Tweet Tasting, we’re absolutely delighted to announce that on November 19th, we’ll be shouting from the rooftops “Let’s hear it for the blends” as we spend an evening with Ballantine’s.

On the night a specially invited ensemble of whisky enthusiasts will be sampling and savouring a quad of quaffable and quintessential quality blended belters, headlined by their 12 Year Old and complimented by their Finest, 17, 21 and 30 Year Old expressions.


We’re also thrilled to announce that we’ll also be joined by Ballantine’s Master Blender, Sandy Hyslop, who’ll not only be tweeting along but also on hand to answer all your Ballantine’s based questions on the night.
If you have any of Ballantine’s whisky wares at home we’d love nothing more if you would pour and tweet your thoughts on the night. So we look forward to seeing you over on Twitter on November 19th at 7:30pm via #BallantinesTT
Until then Happy Dramlaxing!
For more information on Ballantine's visit: ballantines.com
Email ThisBlogThis!Share to TwitterShare to FacebookShare to Pinterest
Newer Post Older Post Home