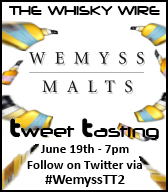 Last week we continued our mission of spreading the good word of the dram, with yet more dramspanking dramfotainment in the form of one of our Twitter trending Tweet Tastings.
Following the huge success of our first Wemyss Malts Tweet Tasting back in November last year, we thought a second was well over due, so last Wednesday we were absolutely thrilled to bring you another evening full of their wondrous whisky wares.
In the good company of our teaming throng of Tweet Tasters we sampled their; Spice King 12 Year Old, Ginger Spice (1988 Glenrothes), Peat Chimney 12 Year Old and Chocolate Honeycomb (2001 Bunnahabhain) expressions.
Here are a few of the tweeted tasted highlights from the night:

Spice King 12 Year Old
@BeersIveKnow Werther’s Originals, cardamom and floral pipe smoke on the nose.
@SajyBaby Woodward’s gripe water, dill, fennel & a touch of ginger.
@KirstyChant I initially got pears and nutmeg. Going back I'm getting sweet honey & orange with pepper.
@KirstyPryde1 Picking up the honeyed orange but more cloves than ginger for me.

Ginger Spice
@AliceLascelles Apple juice, apple turnover, warm pastry and clove/ginger - a whole lotta apple.
@mattveira Something I never thought I'd say "Ginger Spice is incredibly seductive & arousing".
@LRWhisky The ginger seems a little tempered by the complexity of the other spices.
@GeorgeHHutton Not as gingery as expected on the palate, more dry & spicy.

As ever these are only a mere flirting flurry of the tasting notes from last week’s tweet tastery. For a full lowdown head over to Twitter and search hashtag #WemyssTT2
All of the whiskies we sampled on the night are available from good specialist retailers including: Master of Malt and Whisky Shop Dufftown.
A huge thanks to everyone who took part and followed last week’s Twitter trending (9th in the UK) tweet tastery. There are plenty more branded and themed Tweet Tastings to come, so if you would like to be one of our tasters, keep your eyes peeled on the website and on our Twitter handles @TheWhiskyWire & @TweetTastings for details.
For more information on Wemyss Malts visit: wemyssmalts.com
Until next time Happy Dramlaxing!