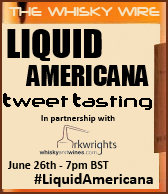 This week we continued our hugely successful string of Tweet Tastings with another themed evening, this time exploring and embracing a quintet of quaffable drams from our friends in the good old US of A.

For what was a blind ‘Liquid Americana’ tasting, we were thrilled to team up yet again with the fine folks at Arkwright’s Whisky and Wine's, who just so happen to have a rather dramspanking selection of American whiskies alongside the rest of their dramming finery.


In the good company of our international gathered troop of Tweet Tasters, on Wednesday night we blind tasted our way through five fine examples of ‘Liquid Americana’ which we later went on to reveal as: Elijah Craig 12 Year Old Small Batch Bourbon, Noah’s Mill Small Batch Bourbon, Bernheim Original Straight Wheat Whiskey, Pikesville Straight Rye and High West Double Rye.
Here are a few of the tweeted tasted highlights from the night:

Elijah Craig 12
@thomas_speller All in all I like the nose. It has vanilla sweetness, fresh fruits, herbs and spices.
@DramStats Tastes like it smells. Liquorice allsorts with pink coconut ice, vanilla and marzipan.
@dvdbloke Sweet spicy vanilla, chewy, creamy, chocolate coffee creams. More spice and yummy.
@emilymayfox The more I go back to it the more herbal, green notes I am getting.

@Andotron Not the strongest of smells. Hints of curry, red cola and a floral perfume kick.
@WhiskyDiscovery Dusty and spicy at first and needs a good shake to wake it. Definite grain husk note before the menthol.
@TheWhiskyWire Getting clove oil infused Fisherman’s Friends.
@andrew1bardsley Dark fruits, cinnamon, rum and raisin, lovely!

@FrazerJ Citrusy pear drops & a butter like edge.
@paula_read Smooth custard, malted milk, toasted cereal. All comfort tastes, then a bit of a warm bite at the end.
@kizzsmyth Crunchy nut cornflakes that have been left in the milk too long.
@whiskyandwines I'm reminded of the French toast & caramelised oranges with yogurt I had at Maison Blanc.

Pikesville Straight Rye
@EdinburghWhisky The nose makes me think of the best kind of breakfast pancakes. Fruit, cream and honey!

High West Double Rye
@DramStats Pepper, clove, juniper, rye bread, cinnamon and creamy vanilla.
@rickfurzer With weveryone on the cloves and juniper, but with some rosemary & bark.
@mynameisgone Surprisingly sweet at first, almost liqueur like. Then a dash of peppery heat and pink grapefruit pith sourness.
@WhiskyDiscovery Both spicy and herbal with a dry white pepper kick at the end.
As ever these are only a mere drizzle of the shower of the tasting notes from the night’s tweet tastery. For a full lowdown head over to Twitter and search hashtag #LiquidAmericana
To sample any of these dramspanking drops of ‘Liquid Americana’ for yourself, head over to Arkwright’s Whisky and Wine’s who currently stock all of the whiskies we tasted on the night. Also if you’re quick you might still be able to grab one of their mini sample packs containing all five of the night’s drams.
A huge thanks to everyone who took part and followed this week’s dramspankery. There are plenty more branded and themed Tweet Tastings to come, so if you would like to be one of our tasters, keep your eyes peeled on the website and on our Twitter handles @TheWhiskyWire & @TweetTastings for details.
Until next time Happy Dramlaxing!
Email ThisBlogThis!Share to TwitterShare to FacebookShare to Pinterest
Newer Post Older Post Home