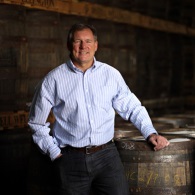 
How long have you been working in the whisky industry?
I first started in the spirits industry in 1984 but from 1988 exclusively with whisky. I was fortunate enough to be invited to Scotland on a technical exchange program to spend a period of time working with Morrison Bowmore Distillers at their Glen Garioch and Auchentoshan distilleries, as well as on Islay at their legendary Bowmore distillery.
It was whilst on Islay that I fell in love with the island, its people but more importantly its whiskies. My time there led to many emotive decisions further on in my career.
On returning from Scotland I was tasked along with our Technical Services Department to re-locate our whisky operations from the relatively small R & B Distillery in Stellenbosch to the current location here at the James Sedgwick Distillery in Wellington. I was appointed as Distillery Manager in 1991 and am still there. I am only the 6th manager in the almost 127 year history of the distillery.
What has been your biggest career highlight to date?
This is a difficult question to answer. Since my appointment in 1991 there has not been a single year when some or other major project has not taken place. The successful completion of all of these projects and seeing the distillery transform from what was an “ugly duckling” to what can now only be described as a “beautiful swan” is immensely satisfying. I think a lot of people forget that the life of a distillery manager is not always with a glass in hand!
On the whisky front it would have to be the three World’s Best Awards we have won from the Whisky Magazine over the last few years. The distillery received the Whisky Icon Brand Innovator of the Year award followed by Three Ships 5yr Old and the World’s Best Blended Whisky in 2012 and then just last month the Bain’s Cape Mountain Whisky and the World’s Best Grain Whisky in 2013.
To receive any award from your peers is a great honour and a humbling experience. To receive three in such a short space of time is beyond imagination.
Can you remember your first dram, and indeed what it was?
Yes I can, it was in my formative years and it was the Famous Grouse. The next morning I swore I would never drink whisky again. Fortunately I soon realised it had nothing to do with what is a fine blended whisky and it had everything to do with youthful exuberance and over indulgence!
What does whisky mean to you?
Whisky is my Life! Having lived on the distillery premises for the past 22 years and for most of that time being on duty 24/7 it has become everything to me. During this time the characters and amazing people I have met have just re-enforced that it was my “calling”. Fortunately I have a great wife who has understood and still does what was required to bring everything to where we are today.
Where would you like to see yourself in five years time?
An interesting question, due to the fact that no two days are the same and that we still have some very exciting projects and plans for the distillery, the times ahead will be more than challenging enough to keep me busy and happy where I am.
However I have an understudy by the name of Jeff Green who has been with me for just over three years. He has the necessary passion and understands that this career is not a 9 till 5 job and therefore in a couple of years maybe the time will be right for other opportunities.
For example it is a genuine desire that we would like to see our whiskies go global, therefore an ambassadorial role within the company working on the awareness and education of South African Whisky would be an exciting challenge. I love interacting with the consumers and writers who enjoy the world of whisky and who make my work all the more worthwhile.
What was your last dram?
It was last night and it was a Tomintoul 33 year old. I have great admiration for my friend and colleague Robert Fleming, the Distilleries Director for Angus Dundee, and the work he has done in a lifetime in the industry.
Do you have a favourite whisky and food pairing combination?
I am partial to a good blue cheese and nice peaty whisky to finish off an evening. I also enjoy melting down blue cheese with a little cream and making a sauce for a nice piece of fillet again with a peaty dram. Whiskies like Bowmore 17yr, Ledaig 10yr and our own Three Ships 5yr blend make good choices.
What’s your favourite time and place to enjoy a dram?
I don’t think there is any one time. A lot depends on the mood and the company. However a cold, wet Cape winters evening with a log fire burning or a Cape West Coast sunset rate right up there.
What do you think is going to be the next big thing on the whisky horizon?
I think we have already seen that age is starting to play less of a role in the new whiskies being released. The master blenders are going to become more creative and so will the marketers.
In a country like South Africa we have a whisky loving nation ranging across all ages, sexes and demographics. We don’t have over 500 years of tradition and although we have the utmost respect for that tradition we can be very innovative and creative within the legislation of what is whisky. I think Bain’s Cape Mountain grain whisky is testimony to that. 20 years ago in South Africa this style of whisky would probably not have been perceived as “whisky” but fortunately the market and consumer has become much more tolerant to change and difference.

What’s the one dram you couldn’t live without?
Going back to my earlier statement of the emotive decisions I have made in my career then this is another one. Bowmore's range of whiskies still remain magical to me and therefore one's I could not live without!

Many thanks to Andy Watts. Who will be the next Whisky Insider? Click back soon to find out!