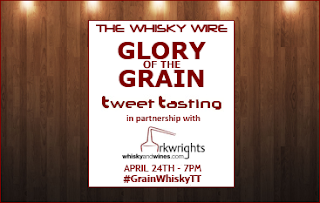 This week we continued our hugely successful string of Tweet Tasting’s with our first themed event, exploring a glorious gaggle of grain whiskies. To make things even more interesting we also tasted them blind.
For our ‘Glory of the Grain’ tasting, we were thrilled to team up with the fine folks at Arkwright’s Whisky and Wine's. Not only do they know a thing or two about whisky but they are extremely and exudingly passionate about it too!
In the good company of our international troop of Tweet Tasters, on Wednesday night we blind tasted our way through four glorious examples of grain whisky, which we later went on to reveal as: Cameron Brig Pure Single Grain Scotch Whisky, Greenore 8yr Single Grain Irish Whiskey, Nikka Coffey Japanese Grain Whisky and Clan Denny Invergordon 1966 Single Grain Scotch Whisky.
Here are a few of the tweeted tasted highlights from the night:

Cameron Brig
@whiskywardrobe Honey with notes of vanilla, cinnamon and cereals. Damn sexy nose!
@WhiskyDiscovery Seems quite shy initially. Cereal packet being opened, cornflakes, faint notes of vanilla, bourbon and aniseed.
@dramologist Light on the palate, a little like a toasted marshmallow with some more over ripe fruits. Grainy notes fade away.
@kizzsmyth Not as sweet in the mouth as expected, still getting a hint of toffee, followed by liquorice.

Nikka Coffey
@TheWhiskyWire A hot Macy D's apple pie covered in vanilla ice cream.
@BeckyPaskin This is pure pudding in a glass! dates, fudge, ice cream, rum, maple syrup.
@steveprentice I don't usually go with the whole rum and raisin thing, but yep, I think here it's fairly spot on.
@TheWhiskyBoys Had to try it with a spot of water, suggest no one else does, it’s perfect neat.

@JayDieNL Wow! Lot’s going on. Dry, wood, bourbon, sherry, chocolate, raisins.
@WhiskyDiscovery Initially gives a slight sour note, but this settles down and slowly sweetens, but not sticky sweet.
@dramologist Not so much peaty, but there is smoke. Probably from time in the cask, rather than any peat smoking.

As ever these are only a mere flirting flurry of the tasting notes from the night’s tweet tastery. For a full lowdown head over to Twitter and search hashtag #GrainWhiskyTT
To sample these gargantuanly glorious grain whiskies for yourself head over to Arkwright’s Whisky and Wine’s who currently stock all the whiskies we sampled on the night.
If you’ve yet to discover the ‘Glory of the Grain’ or are dare I say sceptical about this dramspankingly delicious style of whisky, a tasting pack of all the whiskies we sampled on the night is available by Clicking Here.
A huge thanks to everyone who took part and followed this weeks dramspankery. There are plenty more branded and themed Tweet Tastings to come, so if you would like to be one of our tasters, keep your eyes peeled on the website and on our Twitter handles @TheWhiskyWire & @TweetTastings for details.
Until next time Happy Dramlaxing!
Email ThisBlogThis!Share to TwitterShare to FacebookShare to Pinterest
Newer Post Older Post Home