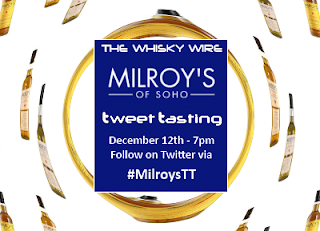 A few weeks back prior to our break for the holidays we held our last Tweet Tasting of 2012, exploring some of the wondrous whisky wares from one of the most iconic whisky retailers and independent bottlers on the planet; Milroy’s of Soho.
In the good company of our gathered group of Tweet Tasters, we were also joined by Isabel Graham-Yooll, the Associate Director of Milroy’s, who along with a gaggle of other whisky lovers were tweeting in on the action live from the basement of Milroy’s.
On the night we had the pleasure of sampling their; Finest Blended Malt, Longmorn 13 Year Old, Cooley 11 Year Old and their Zuidam Dutch Rye.
Here are a few of the tweeted tasted highlights from the night:

@champdenwhite The flavours dance across the palate quite quickly making this very interesting before becoming settled and balanced.

@ifotou Sweet dewy grass with nail polish (not remover) heavenly floral notes, really fruity I want to dive right in and stay there.

@whiskyrepublic I'm stuck in the carpenter's workshop, the oils, the different woods, the heat, the varnish - intense & a little claustrophobic.


As ever these are only a mere dusting of the tasting notes from the night’s Twitter trending dramanagins. For a full lowdown head over to Twitter and search hashtag #MilroysTT

A huge thanks to everyone who took part and followed all the drinkery pokery on the night. There are plenty more Tweet Tastings to come in 2013, so if you would like to be one of our tasters, register your interest and contact details now by emailing via the contact tab marking the subject line ‘Tweet Tastings’.

For more information on Milroy’s of Soho, and to buy any of the whiskies we sampled visit: milroys.co.uk