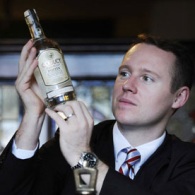 How long have you been working in the whisky industry?
Only since 2000 having been involved in the finance industry prior to that, but I lived through the early years of Cooley Distillery which was founded by my father in 1987.
What has been your biggest career highlight to date?
Becoming the Managing Director of Cooley and overseeing its evolution from 2009 till its take-over by Beam earlier this year.
Can you remember your first dram, and indeed what it was?
It was a naggin’ of Powers Irish whiskey, and after drinking it too eagerly I then learned to appreciate taking your time while drinking whiskey.
What does whisky mean to you?
Everything! It’s in my blood at this stage and I’m passionate about bringing an independent voice back to the Irish whiskey category to help continue its International growth.
Where would you like to see yourself in five years time?
I would like to see me and the Teeling Whiskey Company established as the leading independent Irish whiskey company producing and bottling world class whiskies
What was your last dram?
Our first bottling ‘Hybrid Malt Whiskey Edition No.1’.
Do you have a favourite whisky and food pairing combination?
I have a fetish for fruity Single Malts with vanilla ice-cream and tropical fruit.
What’s your favourite time and place to enjoy a dram?
Anytime and anywhere, as long as it's with good company.
What do you think is going to be the next big thing on the whisky horizon?
The continued re-emergence of Irish whiskey, through the power of the multinationals already in the category and the arrival of new entrepreneurs expanding Single Malt and Pot Still offerings.
What’s the one dram you couldn’t live without?
Cooley’s Connemara Peated Single Malt Irish whiskey (until we have our own Irish Peated).
Many thanks to Jack Teeling. Who will be the next Whisky Insider? Click back soon to find out!
Email ThisBlogThis!Share to TwitterShare to FacebookShare to Pinterest
Newer Post Older Post Home