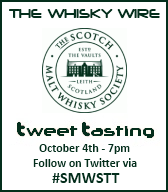 Last Thursday we held the latest in our on-going string of hugely successful Tweet Tastings, exploring a gaggle of dramming delights from The Scotch Malt Whisky Society aka The SMWS. Infact the evening was such a success that we even managed to trend the event on Twitter and were the third most talked about topic in the UK on the night.
In addition to our intrepid group of Tweet Tasters, we were also joined by a couple of teams of eager tasters who were taking part live from the SMWS venues in London and Edinburgh.
On the night we sampled four whiskies that the society had put together for the third release of their 'In Celebration of The Whisky Show London' series, which were named and labeled in their unique numeric style and comprised of; '48.33' Marshmallows and chocolate eclairs, '44.52' The artist, the brewer and the baker, 'G5.6' Bye, bye Miss American rye & '3.194' Surf and Turf BBQ.
Here’s a few of the tweeted tasted highlights from last night:

SMWS: 44.52
(The artist, the brewer and the baker)
@rodbodtoo “I Just Spilled Chocolate Orange Milkshake On A Newly Varnished Bench On A Hot Day” is what it should be called.
@SMWSLondon Leather and salted popcorn in an musty cinema on the nose. Getting sweeter with time.
@LRWhisky The nose is very lemony, almost lemon sorbet like, before waves of vanilla and grassy meadows delight you.

SMWS: 3.194
(Surf and Turf BBQ)
@EdinburghWhisky Honey glazed ham with cloves, smoked mackerel, germoline and prawn tempura before beach bonfire smoke hits me.
@WhiskyDiscovery Salty smack, yet sweet too. There's a sweet scented pipe smoke taste a little liquorice and a short peppery blast, before mellowing.
@dvdbloke Never used to be a big islay fan in the early days, but you can't beat this kind of nose. It’s heavenly!

*Images have been produced for illustrative purposes only
As ever these are only a mere smear of the tasting notes from the night’s Twitter trending dramanagins. For a full lowdown head over to Twitter and search hashtag #SMWSTT.
A huge thanks to everyone who took part and followed last week’s drinkery pokery. There are plenty more Tweet Tastings to come, so if you would like to be one of our tasters, register your interest and contact details now by emailing via the contact tab marking the subject line ‘Tweet Tastings’.
For more information on The Scotch Malt Whisky Society and to sign up as a member visit: smws.co.uk
Internationally you can do exactly the same by visiting: smws.com
Until next time Happy Dramlaxing!
Email ThisBlogThis!Share to TwitterShare to FacebookShare to Pinterest
Newer Post Older Post Home