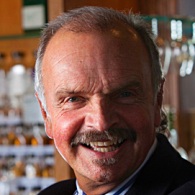 
How long have you been working in the whisky industry?
My father Fred D Laing (FDL) took me out of school for two different business/sales trips through Central and South America in 1966/67. He thought that at 16 years of age, this would be part of my University-of-Life education (and we had great fun down there). I almost joined Invergordon Distillers on an apprenticeship scheme in 1968 but went instead to Whyte & Mackay on a similar scheme, working closely with Major Hartley Whyte and his brother Alex. Back then it was still very much a family owned company.  Two years later saw me at White Horse Distillers, and in 1972 I joined FDL in the family business, so nepotism definitely played a part!
What has been your biggest career highlight to date?
Despite my current love of and close involvement with the Malt category, I am a commercial animal who loves new product development. In 1989 I put a ceramic decanter together (at which I wince today) shaped precisely like a golf bag incorporating a range of tartans, into which we filled a five year blend. That marriage of Scotch whisky, tartan and Golf drove two years of fabulous sales, particularly in to the Pacific Rim with container loads being shipped. It brought us the Queen’s Award for Export Achievement in its Silver Jubilee year 1990. Beyond that, “reinventing” Douglas Laing 12 years ago from a specialist blender/fancy packer into the single Malt specialist we are today still makes me smile.
Can you remember your first dram, and indeed what it was?
I now know my father used to breathe Port Ellen over me when I was a wee fella. However, having seen the bad side of our industry where colleagues were kick starting their day with a dram in their coffee I stayed away from whisky until travelling through the Far East in the late 70s. If you were selling 25 year old King of Scots or 21 year old Douglas Blend over there you had to be seen to be drinking it in the night markets of Taipei, Tokyo or Seoul in the wee early hours. I took to rather enjoying fine Scotch from then on.
Where would you like to see yourself in five years time?
Hey, then I’ll be an old guy but I still want to be steeped in Scotch. Maybe with a bit more time for holidays and sport, if my knees hold up. If the Whisky festivals allow it I’d still like to get an International cap for squash, maybe in the over 65 age group?
What was your last dram?
The last dram I had this morning was a Highland Park 16 year old, more maritime and peat from this particular single cask than normal. By the time I get home tonight I expect it to be a Port Ellen 30 year old, officially duty paid!  from our Old & Rare selection. I do not believe I have ever bought a bottle of Scotch in a retail shop, so I just don’t know what else I may be missing out there.
Do you have a favourite whisky and food pairing combination?
I'm partial to chocolate ice cream doused in our Cambus 46/47 year old. Clan Denny Grain is just so full of vanilla that they work marvellously well together. Not recommended however for the waistline! Another very different pairing is our Big Peat with lightly smoked salmon, the combination really highlights Big Peat's smoky, ashy feistiness!
What’s your favourite time and place to enjoy a dram?
That takes me back to being a simple man of commerce.  I love to be with a visitor in my office, or a consumer at a Whisky Show. Who says “I don’t like Scotch”. I reckon there will always be a malt, a grain or a blend I can introduce them to which we can then enjoy together.
What do you think is going to be the next big thing on the whisky horizon?
Conceivably another whisky loch, with another super abundance of stock out there. Currently there is a perceived stock shortage based on growth and anticipated further growth in the BRIC markets.  Spurred on by over enthusiastic marketing teams the distillers are maybe cranking up production only to find that sales fall away a couple of years later.  That’s something a few grey heads in our industry have seen two or three times already. From our point of view and with the success of Big Peat there may be more blends of malt. After all it takes us right back to the blending skills FDL brought to the business sixty years ago, though we would skip the Grain involvement.
What’s the one dram you couldn’t live without?
Emotionally and commercially I am locked into Port Ellen. FDL loved it in his blends and so he grossly over committed to it for which reason we have been so well stocked, having removed it from our King of Scots and House of Peers blends 11 years ago. Now retained only for single cask release I still have some of the younger bottled stock that is feisty, big, oily and leathery and I can then enjoy the contrast with the older stock we now offer which is softening, becoming more subtle but which still carries ozone and soft peat though its leather is now softer and mashy through chewing. I love it!

Many thanks to Fred Laing. Who will be the next Whisky Insider? Click back soon to find out!