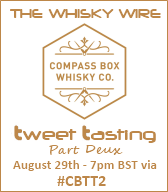 Last night we continued our hugely successful string of Tweet Tastings with a bit of dramja vu action, in the form of a second outing with those fine folks at the contemporary yet traditional dramming power house that is Compass Box.
In addition to our gaggle of Tweet Tasters from the UK and the Netherlands we were also joined by Compass Box’s very own Chris Maybin, who not only tweeted in on the action but also was on hand to answer any Compass Box based questions raised on the night.
During our first Compass Box dramstravaganza last September we were treated to a trio of trailblazing drams in the form of Spice Tree, Peat Monster and the then newly released Great King Street Artist’s Blend. This time round we were very fortunate in being able to sample their Oak Cross and Hedonism offerings, followed by a real treat of a finale "drum roll" in being some of the first people in the world to sample their new Flaming Heart 2012 Edition.
Here’s a few of the tweeted tasted highlights from last night:

@WHISKYILEACH Smooth and gentle vanilla with honey notes, some greens mixed with orange.
@LRWhisky Hints of star anise, oranges, nutmeg and banana (chewy sweets).
@steveprentice I didn't think I had a preconception of this, but it's better than I thought it'd be?! It's fantastic, light and summery.

Compass Box Hedonism
@rodbodtoo Ah the sweet scent of good grain whisky. It's a kind of banana cream and varnish thing. Very creamy.
@steveprentice I'll admit that up to now I've not been a big fan of grain whisky. I've found only very few I get on with, but the nose here is good.
@TheWhiskyWire Summer & autumn berries in a cloud of coconut, showered in a finesseful flurry of crushed pink peppercorns.

Compass Box Flaming Heart 2012
@DramStats Very spicy at first, kind of Ardbeg Alligator like. There’s sweetness, maybe milk choc raisins, but fiery pepper dominates.
@PresleyKa Wow, getting spices, dry fruits, dried flowers, slight of salty sea air on a fresh day. Just really makes me want to go camping.
@theWhiskyReview Fiery fudge tempering to a wave of smoking heather and finishing in a chili aftertaste. Fantastic Flaming Heart 2012.
As ever these are only a mere sprinkling of the tasting notes from last night’s Twitter trending dramstravaganza. For a full lowdown head over to Twitter and search hashtag #CBTT2
To sample these deeply delicious dramming ditty’s for yourself, you can order Oak Cross for £34.49 and Hedonism for £52.75 from The Whisky Exchange. Flaming Heart 2012 will be released in September and will retail for around £80-85 in the UK.
A huge thanks to everyone who took part or followed last night's drinker pokery. There are plenty more Tweet Tastings to come, so if you would like to be one of our tasters, register your interest and contact details now by emailing via the contact tab marking the subject line ‘Tweet Tastings’.
For more information on Compass Box visit: compassboxwhisky.com
Email ThisBlogThis!Share to TwitterShare to FacebookShare to Pinterest
Newer Post Older Post Home