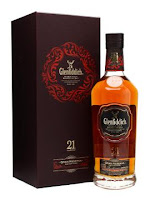 In an industry that's dominated by a handful of drink giant multinationals, there’s almost something cynically paradoxical about the producer of the world’s number one single malt Scotch whisky being independent. Well no cynicism needed as Glenfiddich is exactly that.

In addition to their world class 12 Year Old bottling, they also just happen to have a whole gaggle of exquisitely eclectic finished and magnificently cask married dramming offerings, which all proudly echo the distillery’s style.

One particular fiddich that's managed to toy and play with my dramming heart over the last few years is their sumptuously sassy, aspirationaly alluring and remarkable rum finished 21 Year Old Gran Reserva. A dram that’s had a few aliases over the years, including what proved to be the rather controversial Havana Reserve, which didn’t go down too well with our American friends.

Now having been rightly reverted back to Gran Reserva, this bountiful beauty has recently received a bottling and packaging makeover, giving it a look and feel that a dram of this stature and distinction truly deserves.

The nose kicks off with a wonderliciously wowing serving of poached pears, baked apricots and a big scoop of rum raisin ice cream. Followed by warming sweet aromas of toffee apples and freshly baked baklava.

The zest and peel from a navel orange make for the next set of delights, along with infused waves of wood spice, cinnamon, vanilla and an almost but not quite there kiss of liquorice.

Used coffee grounds , chocolate bourbon biscuits and something heathery yet leathery then provide a real depth to the proceedings, as does the arrival of a tin of pineapple chunks and a beach barbecued banana.

The palate kicks off with a decadently delicious part deconstruction of a sticky toffee pudding; chopped dates, a glug of golden syrup, a very liberal drop of palate grasping vanilla extract and a hot pan of caramelising muscavado sugar for the sauce.

Spiced pears, dried fruits and an assortment of citrus peels make for the next set of palatable pleasures, along with a wealth of commanding but non overpowering wood spice and a fennel infused pina colada.

Those chocolate bourbon biscuits make reappearance, this time accompanied by a few unwrapped Werther’s Originals, a couple of Artisan du Chocolat’s salted caramels and a cheeky hint-ette of espresso.

It has to be said that this particular drop of fiddich offers up more of a finale than a finish, exuding its sumptuously sweet, wood spiced wares long into the night. Ensuring that you’re dramgasmicly satisfied, but by golly left yearning for more.