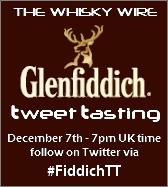 Last night we held The Whisky Wire’s latest Tweet Tasting event, exploring the core range offerings from the Glenfiddich distillery. We were also joined by their UK Brand Ambassador Jamie Milne, who not only took to tweet tasting like a duck to water but was on hand to answer any Fiddich based questions from those taking part or following last nights dramanagins.

Our group of Tweet Tasters were treated to four fab frolicking Fiddich's comprising of their 12, 15 and 18 year old core expressions. Followed by a Mystery Dram which we later went on to discover was infact their recently released 19 year old ‘Age of Discovery’ bottling.

Here are a few of the tweeted tasted highlights from last night:

Glenfiddich 15 Year Old
@jdcornthwaite 15YO blows me away. Such a bright noise full of red cherry, mixed berries, sweetness and all the goodness of Christmas.
@mohler I'm getting powdery custard/cereal at the back of my mouth, orange round the sides, sweet apples on top & tingle on the tip.
@TIA568B On the palate really getting the vanilla from that American new oak, a bit of butterscotch and some xmas pudding.

These are merely a light flurry of the mountain of tasting notes from last night's Tweet Tasting dramanagins. For a full lowdown on yesterday's Fiddich fest, head over to Twitter and search hashtag #FiddichTT.

The 12, 15 & 18 year old expressions that we sampled are widely available on the high street. The 19 year old ‘Age of Discovery’ bottling is currently only available through Travel Retail but will be on general release in the UK early next year.